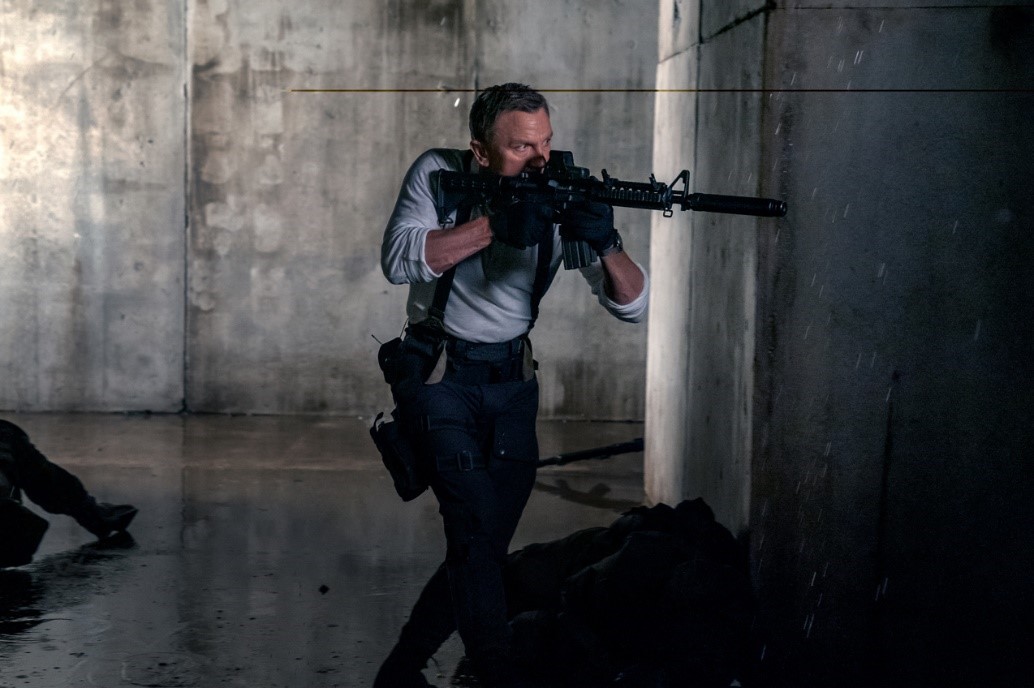 17 months after the original release date, it’s now finally time for the world to set their eyes on the iconic British super spy that is James Bond in the hotly anticipated 25th film of the franchise. The film was held back due to the ongoing Covid-19 pandemic but it’s now hitting cinemas Thursday 30th September.

James Bond: No Time to Die is Daniel Craig’s 5th Bond feature which he has declared to be his final one as 007.   Ralph Fiennes, Lea Seadoux, Ben Whishaw and Naomi Harris reprise their own roles from the previous films but the 25th feature now introduces Lashana Lynch as the new, intriguing ‘00’ and Rami Malek playing Bond’s new adversary.

The film starts as Bond is enjoying a tranquil life in Jamaica after leaving active service. His peace is short-lived when his old friend Felix Leiter from the CIA turns up asking for help. The mission to rescue a kidnapped scientist turns out to be far more treacherous than expected, leading Bond onto the trail of a mysterious villain with dangerous new technology.

The production was based at the world famous, and Filming in England Partnership member, Pinewood Studios. Pinewood is famed as the home of James Bond with the Albert R. Broccoli’s (Producer of many of the James Bond films) legendary 007 Stage, built in 2007.

The Filming in England team and Film Office partners supported the Bond locations department on some weird and wonderful location briefs when early scouting begun back in 2018.  From operational food processing plants of scale to cavernous concrete spaces, not to mention numerous film friendly sites to accommodate some serious stunt action.  We are delighted that for over 25 years Bond continues to internationally showcase England’s versatile and film friendly locations and world-class studio facilities.

The production shot the bulk of the film in England and Jamaica but they also took their filming to Norway, Italy and Scotland.  Outside the iconic London scenes, there were many locations used across England, shooting scenes across the South of England showcasing the vast potential of location doubles the English Regions has to offer.

The Crown Estate owns the whole of the Windsor Estate, encompassing some 15,800 acres. Both Buttersteep Forest and Swinley Forest in Windsor Estate were used as filming locations for this production.  Some eagle-eyed 007 fans spotted Madeleine Swann’s Norwegian Cabin reappearing in Swinley Forest.

The filmmakers worked closely with the Ministry of Defence throughout the making of No Time to Die, with both the Royal Air Force and the Royal Navy granting the production access to key assets and personnel. The Army also supplied troops from the Household Cavalry.

The armed forces have cooperated with filming before. Location manager Charlie Hayes explains, “Bond has his own history as a Naval officer and in this film, we have worked alongside all three branches,” he says, “and it is a very special relationship that we have formed with them.”

The Royal Air Force granted access to their largest airbase, RAF Brize Norton in Oxfordshire. This proved an essential location, standing in for a NATO airbase in Norway in the build-up to an important scene. Bond and Lynch’s character Nomi join their MI6 allies at the NATO airbase, boarding a C-17 Globemaster. The C-17 Globemaster is a long-range, heavy-lift strategic transport aircraft that can operate close to an area of operations for combat, peacekeeping, or humanitarian missions. The scene inside the C-17 is a classic quartermaster moment, where Q gives Bond and Nomi gadgets to assist them on their upcoming mission. As Bond and Nomi exit the plane, Q remains aboard, looking at specifications and schematics of their target to give them information and to guide them through their attack.

The Royal Navy in Portsmouth, Hampshire also provided a vital asset, allowing the production’s second unit to film aboard HMS Dragon – one of its Type 45 air defence destroyers. HMS Dragon is one of the most advanced warships in the world and it plays a crucial role in No Time to Die.

“The Royal Navy were very generous. They allowed us to send a second unit crew who were on the boat filming. We have always had really wonderful cooperation from all the services in the UK. The RAF were terrifically helpful in giving us access to their airbase, and access to the plane, and we have been so grateful for the cooperation of the Royal Navy and the Army. The Ministry of Defence has always been very supportive of the James Bond films,” says producer Barbara Broccoli.

Alongside this, the cast and crew ventured down to Salisbury Plain in Wiltshire – also owned by the Ministry of Defence – which is a vast tract of rural Wiltshire known as one of Great Britain’s best open spaces.  Here they filmed an epic Land Rover chase sequence on the Defence Training Estate with lots of special effects explosions and the Land Rovers having Russian numberplates.

To celebrate the upcoming release of the 25th James Bond film, we look back at the top secret 007 filming locations in the English Regions.  The versatility of England’s landscapes and locations has provided the backdrop to every single James Bond film over the last 25 years.  With the incredible talent behind-the-scenes and some movie magic, England has doubled for Russia, Germany, United States, Turkey, North Korea, Montenegro, Austria and Rome: 25 Years of 007 Filming Locations.

James Bond: No Time to Die was released in cinemas on Thursday 30th September.