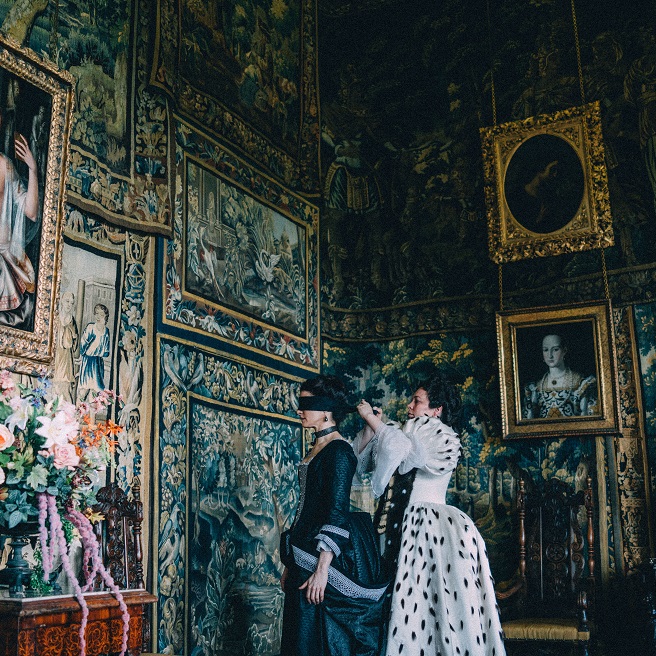 Where was The Favourite filmed?

Period comedy-drama The Favourite, directed by Yorgos Lanthimos, was filmed at Hatfield House in Hertfordshire, an ideal location to represent the court of Queen Anne, who is portrayed perfectly by Olivia Colman. Whilst a frail Queen Anne occupies the throne, her close friend Lady Sarah (Rachel Weisz) governs the country. When a new servant Abigail (Emma Stone) arrives, so begins a twisted romance triangle driven by a hunger for power, which is expertly portrayed by the powerful trio of female actresses.

Multi-award-winning The Favourite was filmed almost entirely on location at Hatfield House in Hertfordshire, one of the finest Jacobean Stately Homes in the country.  The estate has housed royals since the 15th Century and is the former childhood home of Elizabeth I. The sumptuous period state rooms, book-lined library, grand staircases, elongated corridors & magnificent grounds have enjoyed starring roles in some of the biggest names in film including Harry Potter, The King’s Speech, Wonder Woman, Paddington, Batman Begins and Tomb Raider.

With the story of The Favourite almost entirely taking place in the confines of the royal palace, finding the right location was critical in making the story come to life on screen. The chequered black-and-white marble floor in Hatfield’s Great Hall helped Production Designer Fiona Crombie develop the design palette for the film. The idea for monochromatic field of golds, champagnes, pineapple and oak tones that permeate throughout the film came from costume designer Sandy Powell. Crombie comments that “We were all delighted by the way that the costumes sit in this gold and wooden warm world”.

“Everything in there is so precious and so beautifully created”

Though the floors and walls were an inspiration, Crombie ended up altering Hatfield as it had never been before. “To create Queen Anne’s room, we stripped out lots of incredible paintings, furniture and drapes so we could just put our own language into it.” She continues: “Of course, we were incredibly respectful. Everything in there is so precious and so beautifully created. One of the biggest challenges we had was all the candles because as you can imagine, there are very strict protocols about managing candles. So we had to use an enormous number of wax catchers. But the people who manage Hatfield were very supportive and we negotiated and negotiated and we wound up being able to do the vast majority of what we wanted to do.”

Set jetters can visit Hatfield House from 6th April 2019 when the house & gardens open for the 2019 season to recognise many scenes that have shot at the house over the years. The impact of film tourism is hugely beneficial to the UK economy.  Film franchises such as Harry Potter, Paddington and Kingsman have featured prominently in UK tourism campaigns, with visitors to the UK spending an estimated £597.7 million in film-related tourism, generating £628.3 million in GVA, 13,440 jobs and yielding £194.9 million in tax revenues. The international success of HETV productions such as The Crown, Downton Abbey, Outlander, Poldark and Game of Thrones also demonstrates a major and beneficial impact on UK tourism, as HETV-related visitors to the UK spent an estimated £266.2 million in 2016, generating 5,990 jobs, £267.8 million in GVA and £84.2 million in additional tax revenue.

Read Creative England and VisitEngland’s report looking further into the impact of screen tourism across England.