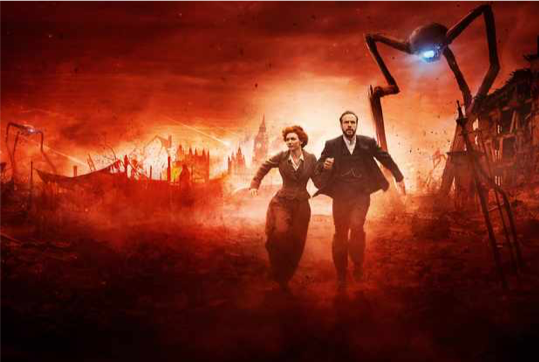 The War of the Worlds comes to the North West

From the first serialised version in 1897 to the present day, H.G. Wells’ War of the Worlds has captivated and terrified audiences, and the latest adaptation by Mammoth Screen, directed by Craig Viveiros, is crash landing onto BBC this Sunday (17th November). We’re especially excited for this particular adaptation because it was heavily supported by the Production Services team here at Creative England; from taking over an entire village in Cheshire to using iconic Liverpool landmarks, we helped facilitate locations in the north west alongside Cheshire West and Chester Council and Liverpool Film Office, as well as provide crucial crew members. The friendly local authorities and communities ensured that we avoided war and brought together different worlds of people, making this production a huge achievement for Creative England and a real testament to the excellent filming locations on offer in the north west.

The War of the Worlds was extensively shot in Cheshire and the Liverpool City Region, transforming many iconic city landmarks and picturesque rural areas into an Edwardian setting. Being the first major production to set the classic story in its original time, it was essential to find the right period locations. Executive Producer, Preethi Mavahalli issued the following statement:

We have some really ambitious set pieces in the show, and there are always challenges to shooting in period locations, so turning a quaint Cheshire village upside down was a major operation – but we’re really proud of the results. We had a really positive experience filming in the North West, with great support from the local authorities and local residents, as well as Liverpool Film Office and Creative England, and we can’t wait for everyone to see the results.

The prospect of an entire production team taking over your home village seems like an alien concept. In this case, it really was. The village of Great Budworth is a quaint area in Cheshire with a population of just over 300 people, who all experienced an invasion of production and acting professionals for five weeks.

In order to ensure minimum impact on the day to day lives of the residents, and to provide thorough information on what to expect, a town hall meeting was held by the crew, Cheshire West and Chester Council and Creative England prior to filming. In this meeting, the residents were provided with production visuals and engaged in an in-depth conversation about the overall filming plan. This was met with a lot of positivity (made all the more encouraging by a few glasses of wine) and locals even had the opportunity to appear as extras in the series:

Mark Valentine (Production Manager) and Andrew Bainbridge (Location Manager) made it clear from the outset that liaising with the local residents and making sure they were aware of and happy with the plans was an absolute priority, and worked to set up a meeting with all the residents to outline the plans before anything was put in place.

The village pub provided the crew with a cosy central hub and a heightened sense of community with the locals; what better way to connect than over a pint and a packet of pork scratchings?

To confirm the friendly atmosphere of this charming little village, a couple of Great Budworth-ians went the extra mile by registering their property onto the Creative England database and becoming the home for protagonists George (Rafe Spall) and Amy (Eleanor Tomlinson):

There has definitely been a great buzz here in Great Budworth… The War of the Worlds shows how friendly the north west is as a filming location. We’re really looking forward to seeing our property and the overall end result on BBC

For more information on registering your property as an English filming location, visit the Locations page on our Filming in England website

From peace to pieces, Hilary and David’s idyllic home and the entire village was transformed from pre-invasion bliss to post-invasion dystopia. To effectively show the impact of an alien invasion, Great Budworth’s picturesque village lanes were strewn with rubbish and rubble. Therefore, the need to stay in frequent communication with local authorities and the residents was imperative. Nick Beech, Creative England’s Production Liaison Manager for the north, worked fervently alongside the production team and local authorities to ensure the happiness of the local residents:

Andrew Bainbridge and Mark Valentine from the production’s locations team contacted Creative England early on, knowing that most residents of delightful, quiet Cheshire villages may have qualms about turning the place upside down for a Martian Invasion. In the months leading up to the shoot we worked closely with Mark, Andrew, and our filming liaison for Cheshire West and Chester Council, David Sejrup, who was invaluable in advising and facilitating from start to finish. It was a testament to the care and professionalism of the production team, and the fantastic support of the local authorities.

David Sejrup from Cheshire West and Chester Council comments on the village’s transformation:

Week one of filming was Great Budworth as we’re all used to seeing it, then the Martians arrived. I was ‘on set’ in week two surrounded by mud, collapsed walls, crashed stage coaches, charred bodies, more mud and the stars galloping through the destruction. There was excitement in the village, one spectator an ex resident had been down every day to watch the filming and meet the cast.

Another extra-terrestrial spot, sourced by Liverpool Film Office, is the iconic ‘Red World’ created by fatal alien plant life. Perfectly encapsulated by a former oil-blending plant in Birkenhead, the Martian killer-plant behind the garishly red atmosphere was made possible by 50 tonnes of sand and many little red crystals amidst the industrial backdrop of the old Mobil oil plant.

The popular location of St George’s Hall in Liverpool acted as a quintessentially Edwardian London setting, surrounded by horses, carriages and period characters. This iconic landmark is a real staple of the north west, which, as put by Location Manager Andrew Bainbridge:

Shows that big scale productions can happen here. I think, as an advert for the north, this production is extraordinary.

Liverpool Film Office recently issued a press release confirming that 2018 was the busiest year for filming in their 30 year history, with The War of the Worlds using many key locations around the Liverpool City Region. Manager of Liverpool Film Office, Lynn Saunders, issued the following:

Filming on the streets of the city region is a regular occurrence and it’s great when we can finally see the end product on television.

One of Creative England’s main roles in the facilitation of this production was to bring together local authorities, including the parish council, local police and highway authorities.

Creative England were instrumental in bringing together all the local authorities and people we needed to talk to. Without them, I would’ve spent a long time finding the right people. They put me in touch immediately with people I should be talking to and, as a result, everything was much simpler”

The bolstering of regional filming locations and crew is a mission Creative England is proud to champion. Our crew database secured four crew members from around the north west, who collectively worked for 290 days on the production. The job roles include the Script Supervisor, Production Coordinator and Assistant Director, all of which were fundamental roles to the production.

The War of the Worlds is airing on Sunday 17th November on BBC One and will be available on BBC iPlayer.