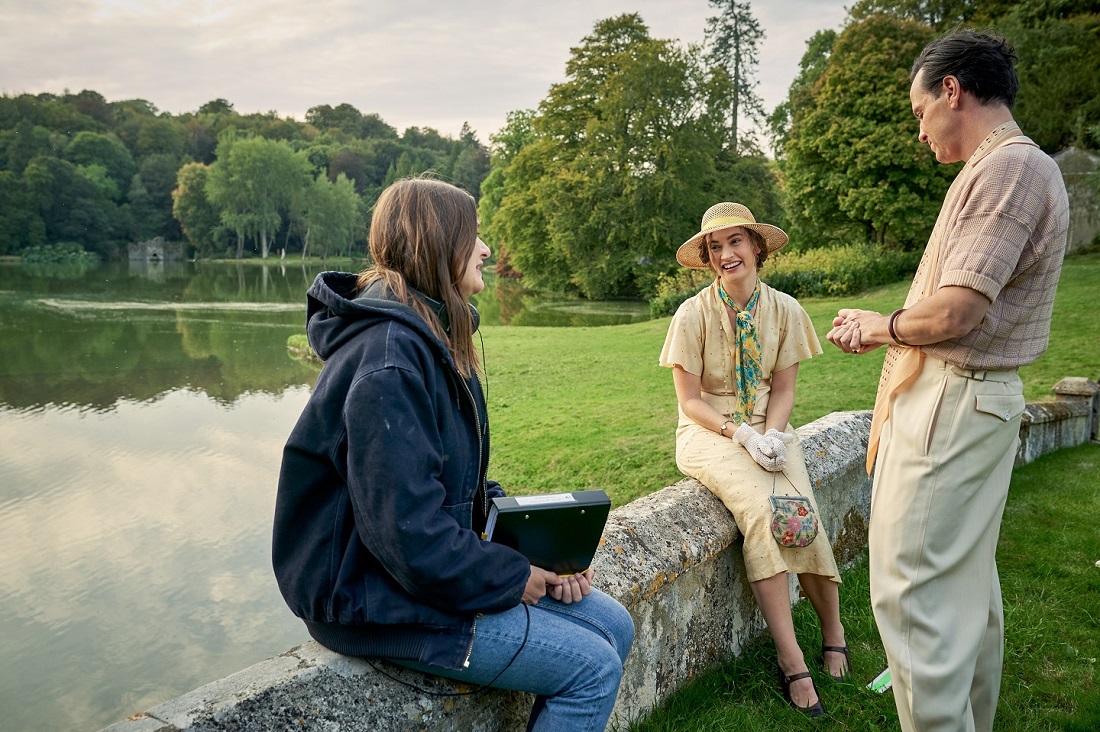 Famed for its cinematic coastline and unique wealth of period properties, it is no wonder BBC One’s latest romantic drama, The Pursuit of Love, decided to film on location in the South West region. Nancy Mitford’s interwar novel is brought to life in this latest adaptation, with decadent costumes, iconic dance scenes and a plethora of historic homes and stately interiors, as the main protagonists Linda Radlett (LILY JAMES) and Fanny Logan (EMILY BEECHAM) go on a whirlwind quest to find love.

Creative England’s Filming in England team worked closely with the British Film Commission (BFC) to publish their Working Safely During COVID-19 in Film and High-end TV Drama Production guidance as part of the wider BFI Screen Sector COVID-19 Task Force recovery initiatives. The Pursuit of Love was one of the first productions to resume filming on location in the summer across Bath with support from Bath Film Office, South Gloucestershire, Wiltshire, and in addition to the South West region, Oxfordshire supported by the Oxfordshire Film Office.

“The Pursuit of Love was the first drama to film in Bath after the initial lockdown period. It was especially exciting to see Green Park Station transformed into the Gare Du Nord.”

The largest dedicated studio facility in the West of England and member of the Filming in England Partnership, The Bottle Yard Studios also housed the production. Period set builds included, Cheyne Walk House, Linda’s London Home, the Radlett’s Country Estate and even parts of Paris were recreated for the drama. Laura Aviles, Senior Bristol Film Manager sheds light on the adaptability of the production during Covid and the filming facilitation the South West has to offer:

“This part of the UK has everything a production like The Pursuit of Love could possibly need; stately homes, studio space at The Bottle Yard, a strong crew base and supportive film offices in Bristol and Bath. Once government had given the green light, Open Book and Moonage Pictures did an excellent job getting the shoot up and running with Covid-safety guidelines firmly in place. It was the hard work and adaptability of crews and companies in Bristol and Bath that enabled the West of England to be at the forefront of shoots like this resuming in the UK.”

The Pursuit of Regional Crew

With 1200+ crew based in the region and the increased demand for local talent, the South West has become a major production hot spot. From runners all the way up to HODs, the region offers all productions a range of talent – something the team behind The Pursuit of Love readily took advantage of.

After a year of uncertainty in which our industry found itself at a virtual standstill, The Pursuit of Love was one of the first projects to ask for assistance and crewing support during an exceptionally difficult time. As our National Crew & Facilities Manager Sam Rifkin recalls:

“March-August 2020 was of course a terrible time for everybody as most productions shut down. Crew not only found themselves suddenly out of work but also, quite a lot of the time, ineligible for financial support. So when The Pursuit of Love informed us they were eager to crack on with crewing it was a huge, huge moment. In a way, this was the production that heralded a positive shift that we’re still experiencing.”

It is no secret crewing is currently at an unprecedented level – a fact recognised by the industry, with the number of productions times the demand for crew increasing steadfastly. With around 40 productions in various stages of prep/shoot across the South West alone, the production surge is showing no signs of slowing down. As big dramas like Bridgerton and The Pursuit of Love continue their love affair with the region, their reliance on our crewing service soars as well – which should be great news for regional crew!

Filming in England Partnership and the National Trust

The Filming in England Partnership connects organisations across England ranging from local authorities, studios and locations to national organisations. The National Trust were one of the earliest national organisations to join the Partnership and we are delighted to see a number of their fantastic sites featured, having played a part in production returning safely to locations. Dyrham Park in South Gloucestershire, Lacock Abbey and Stourhead in Wiltshire provided the perfect South West backdrop. Harvey Edgington, Senior Filming and Locations Manager at the National Trust talks about the resuming of filming activity and eccentric scenes played out in the costume drama:

“The Pursuit of Love filmed at a number of National Trust places in the South West last summer. It was the first costume drama we’d shot during the pandemic, so it was a real eye-opener. As well as protecting the historic buildings and their collections, we were adapting to the new safety protocols. Thankfully, it all went well, there was a sense that everyone was thrilled to be back at work. It sent a bit of green-light to the rest of the industry to start up again, which benefitted the Trust as the fees provide valuable income for our places.

The days were long and it was certainly hard work but there were plenty of highlights, such as watching Andrew Scott ­– who plays the Radletts’ eccentric neighbour Lord Merlin – dancing around the Gilt Leather Parlour at Dyrham Park in silk pyjamas. Or, seeing the 18th century Entrance Hall at Stourhead transformed into a glamorous art-deco nightclub. The production also made use of the interiors at Lacock Abbey. Rooms in the Abbey stood in for Christ Church College, Oxford, which is unusual as it’s usually the cloisters (as seen in Harry Potter) that get the limelight there.”

Viewers can watch the complete three-part drama The Pursuit of Love on BBC iPlayer.