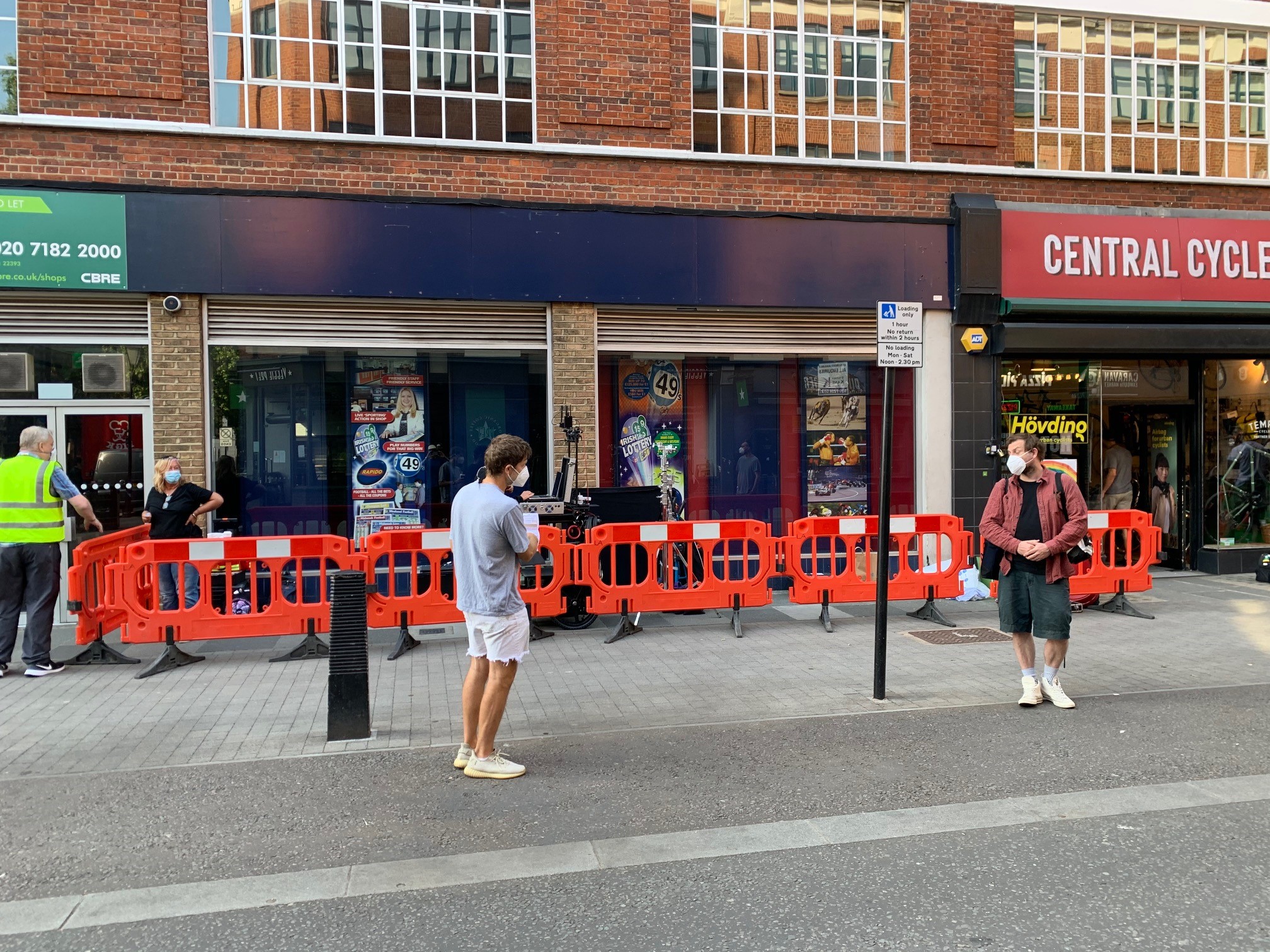 With the Film and TV industry ramping back up, Creative England, working with industry and delivery partners, are committed to sharing best practises from different productions in how they are implementing their own policies and protocols in order to keep crew, cast and the public safe.  From the earliest days of the Covid-19 pandemic Commercial filming was one of the first types of productions to start back up.  With the APA publishing their Covid-19 guidelines for Commercial filming early on which was then followed by the British Film Commission’s Production Guidance for Feature and HETV, grasping what has worked on different film sets and locations and what could be scaled up for all production sizes is imperative as our sector recovers.

We spoke to Location Manager of 20 years and owner of Salt, Eugene Strange, who was scouting for productions as early as May this year and quick to employ all Government approved guidelines on his location shoots.  Eugene has worked across TV Commercials, photography shoots as well as location managing films such as Harry Brown, Under The Skin, King of Thieves and Macbeth.  Having scouted and managed productions across England over the summer he tells us about his own experiences and how he has managed to successfully work within the ‘new normal’.

What have been the main changes you have found since the outbreak of Covid-19?

We obviously adopted the guidelines, initially with the APA guidance coming out earlier and then the BFC Production guidance, we made sure that we brought on all the obvious things; social distancing, wearing PPE, trying to keep crew sizes down to a minimum and having a lot of hand sanitising stations.  It has been essential ensuring locations you plan to enter are clean and then cleaned again when you leave.

Quite early on there were a lot of restrictions in terms of accessing buildings.  We would stagger access to some locations, so often dress the location day before, then you would have the electrical department in to set lights and then the art department would go in again and augment what was done with the electrical department.  Then the camera team would go in and set up the cameras, followed by the directors who would go in with actors and line up and then often go outside to watch on monitors.

If we were on a street or in any public space we would obviously try not to get in the way of the public so you couldn’t just put all your equipment on the street like we have done in the past, you needed to make sure there were safe passages for public to get past without coming into two metre proximity with the crew.  So, we would create pens with barriers where the crew would be waiting, looking at footage on monitors or waiting for their moment to go tweak hair or make up and we’d make sure to stagger that activity.

Remote working has become a ‘new normal’ and so communication wise it has become an essential requirement that there be good internet connection at the location.  Before, this was always a consideration but now an essential development that has come post Covid-19.

From the earliest of stages of scouting, as a location manager, I would be making use of videos and photographs, but I was also often live on WhatsApp communicating with directors, producers and Directors of Photography online whilst I was at locations.

I have done digital tech recces with directors in LA, having a laptop or camera at the location and they would watch on Zoom or the equivalent.  I have actually done full shoots where the director has been directing from home in LA, whether that’s because they can’t get into the country, or leave their country or just for their own safety and the avoidance of travel which may have  been desirable.

Can you tell us a bit more about your cleaning routines on entering a location?

Cleaning routines depend on the type of location. For a small location I will get a company to go in and do it manually, wipe surfaces and ensure anything that was going to be touched or had been touched were wiped clean.  For bigger locations we have used Fogging companies that use the same fogging substance that hospitals and medical facilities use.  So, you fog, leave it to settle and aerate for 10 minutes and then it is safe to go in.  As it is quite quick it has been a good way of working so you could potentially do a large residential house and be in and out and safe within an hour.  For filming purposes, it can be done before everyone arrives and works within your filming day, but we have also done it the day before to make sure it is totally clear and need not affect the filming schedule.

What were your key challenges?

With some of my initial jobs earlier in the summer there was a lot of time spent persuading councils, highways or businesses that we could carry out filming safely and securely.  It came down to finding what councils were open for filming.

There are still a lot of businesses that are closed and still a lot of staff furloughed so at times it has been difficult phoning up councils or film offices that haven’t been able to help even if they wanted to because either their other departments have not been available or that filming isn’t a pressing issue compared to the whole management of Covid in their areas.  Also access to buildings; the pool of locations in some areas has been reduced, but equally it has provided opportunities; for example, some pubs, restaurants, or schools were very open to filming and the income it could provide.

What has it been like having the new Covid-19 Supervisor role within your crew?

The Covid Supervisor role that has been created in our industry has been important all round.  Firstly, to take on quite a large chunk of work from the production or locations team – the extra equipment you need, the PPE and being a marshal on set in a friendly way to ensure crew aren’t getting too close and everyone is kept safe.  They are across everything from ensuring food is being delivered in the correct way, that there is enough space between each other, and temperatures are checked daily.  Overall, the Covid Supervisor’s I have worked with have been from a production background so AD’s or location managers but generally people that the crew will listen to and ensure that people follow the guidelines.

What was the general reaction when you were filming in public spaces or when enquiring about filming with location owners?

It has been and continues to be generally very positive.  Location owners have been very welcoming, I would say 80% of the houses or locations I would approach, particularly those on location libraries, were overall very up for filming.  They knew it was in the production’s interest to manage the crew for their own well-being and that they would be carrying out filming in a Covid-safe way.

Also, the perception, especially if you are filming on a street or in any public areas, you do not want to upset the public by breaking the guidelines everyone has been following.  Crews also want to make sure that filming can continue, either by the avoidance of someone getting ill or the avoidance of breaking the guidelines so that someone feels like they need to complain.  So, everyone across the industry has been strict and respectful of the rules to make sure that we can keep on working.

Thank you, Eugene, for taking the time to share valuable insights into how you have managed productions in the last few months.  We hope to continue collating such insights and share further practical case studies in the coming months.