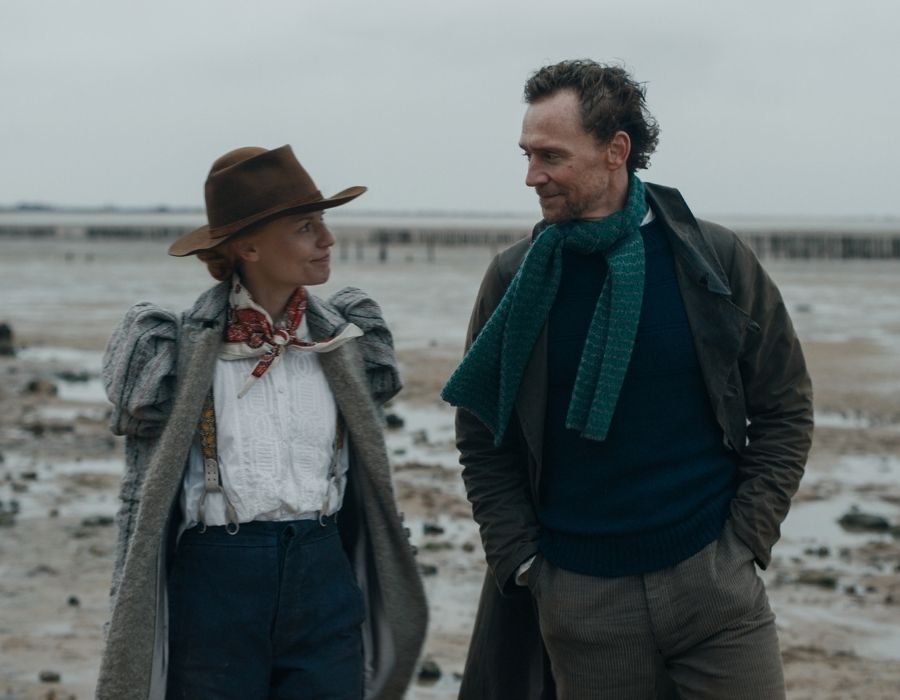 The Essex Serpent is a six-part limited series based on Sarah Perry’s bestselling, award-winning, novel of the same name. The novel won the Waterstones Book of the Year, beating Harry Potter and the Cursed Child, and the British Book Awards accolade of Book of the Year both in 2016.

Produced by See-Saw Films and directed by Clio Barnard, the series sees Claire Danes and Tom Hiddleston star in a mysterious drama surrounding a mythical monster whose presence looms over a small Essex village, Aldwinter.

Set in Victorian England, in 1893, Cora Seaborne (Claire Danes) arrives from London to Essex and becomes engrossed by a local legend, the mythical ‘Essex Serpent’. Cora develops a friendship with the village’s devoted Vicar, Will Ransome (Tom Hiddleston) as the frightening rumours tower over Aldwinter.

For the production team, recreating the 18th century Essex landscape was pivotal, and approximately half of The Essex Serpent was filmed in Essex itself. The series will take viewers on a journey across the beautiful marshes, where the Blackwater River leads to the North Sea.

Filming took place in early 2021 and they were based in Maldon’s Promenade Park. The market town Maldon is known for their history dating back to the Anglo-Saxon times where The Battle of Maldon (991AD) took place on the shores of the River Blackwater.

Several locations in Maldon were used, including The Hythe Quay, the area in front of the famous East coast barges. The Hythe Quay was transformed into an authentic backdrop, with barrow-loads of dirt spread across the concrete, market stalls and the iconic Thames sailing barges.  This location was the home to the Thames barges that were in use from the late 19th century and now survive as leisure craft.  Dressed in period costume, locals were given the opportunity to be in this series, including Maldon District Council’s Russell Dawes and the Blackwater Bailiff Nigel Harmer.

The Hythe Quay was one of author, Sarah Perry’s, inspirations where she “recalled begging to be taken to Maldon as a child, where we’d watch the oxblood sails of the Thames barges go up and down the horizon.” And what better place to double the fictional village than the places that inspired it?

Maldon is a picturesque part of East Essex, located on the Blackwater Estuary and has a reputation for film friendliness among Location Managers having been home to many large productions such as, BBC’s adaptation of Great Expectations (2011), The Third Day (2020), The Woman in Black (2012), The Mercy (2018) and ITV thriller Liar (2017).

Russell Dawes said, “On behalf of Maldon District Council, I was absolutely delighted that our area was chosen as a location for some of the scenes for the Essex Serpent.  Despite filming during the Covid pandemic, the whole experience from start to finish was an extremely positive one for the residents, businesses and the Council.  The locations team under expert guidance of Harriet Lawrence, was the best I have worked with, ensuring that excellent communication was maintained throughout. I am thrilled to see that Essex Serpent has now aired with great acclaim and I am sure will be nominated for many awards. We are looking forward to welcoming the visitors to our area to see the many locations which feature in the series.”

In the middle of the town, Silver Street was transformed into a dirt track with barrel carts. This street is home to the Blue Boar Hotel which featured in the drama, a Grade II listed building that dates back to the 14th century. It’s also home to The Moot Hall, a 15th-century courthouse which is now a museum and wedding venue which the crew used to film from the roof, looking across the roofs of Maldon and out to the Blackwater Estuary.

The village of North Fambridge was one of the locations used to create Aldwinter, providing cottages on the River Crouch. Essex’s famous saltmarshes also provided a stunning backdrop for the series including Tollesbury salt marsh.

A few scenes were shot on the island of Mersea, an island connected to the mainland by the Strood causeway which floods at high tide. The High Street in West Mersea was used for scenes in Aldwinter.  Cudmore Grove Country Park on Mersea was used as Cora and Will walk along the cliffs.  They were also filmed on the beach, as they dug for fossils in the eroded cliffs.

Erica Gilson, Marketing and Business Development Manager at Essex County Council said, “We were delighted when Cudmore Grove Country Park was identified as one of the filming locations for the Essex Serpent.

We have an amazing coastline in Essex, and it seemed only fitting that the series was shot here, not just for the authenticity of the location, but also because of the pride that residents feel for their county which was described so intricately in the book and now beautifully portrayed onscreen.

Cudmore Grove country park is a Site of Special Scientific Interest and is home to protected species of flora and fauna, so it was important that we worked with a location team who understood the restrictions and special considerations that everyone needed to adhere to in order for the filming to happen.

Fossil hunting is so pivotal to the storyline that we were delighted when the beach at Cudmore Grove Country Park was chosen for the fossil hunting scene. The London Clay foreshore and cliffs have yielded many real-life fossils over the years, including a Hippopotamus which was found in the 1970s, so it was important that the cliffs were treated sensitively throughout the filming to protect the site.

The Cudmore Grove scenes were shot during the pandemic, but the way in which everyone in the production team behaved and were working to a strict code of conduct around mitigating the risk of COVID-19 meant that we had no hesitation about welcoming the crew on site.”

Alresford Creek is another area used to make the elements of Aldwinter. It is an area of grassland and calm waters along the River Colne. Scenes of Cora and Will walking were filmed here.

All of these locations are combined, and together they form the extremely, believable, fictional village of Aldwinter.

“This was a location driven project, with only 4 weeks out of a 22 week shoot, not on location. The edge of the world tidal estuaries of Essex are an essential part of the world in the story. – it had a more raw, elemental and very muddy feel which adds a crucial element to the story, showing how far from Cora’s London life she has come. As someone said, “mud, sweat and tears” went into this shoot.

Scouting for the shifting hinterland where sky, sea and land meet was an epic scout. Journeying down every farm track that would take me to the very edge of the land where it gave way to sea, exploring every creek and eventually shooting where the land/sea scape is never the same, sometimes it’s sea, sometimes it’s land.

We shot for 20 weeks (plus additional photography 2 weeks) in London and Essex during the pandemic. The tide dictated everything and the Essex locations we used were often under water completely at high Spring tides. For the first 8 weeks in Essex, every day except one, was entirely dependent on the tides. And that one day was only not tide-dependent, because we had boat work on a reservoir.

One location, a hard to access old Oyster hut, which became Cracknell’s island; I knew we had to make it work when the designer Alice Normington first saw it and said to me it was her favourite location EVER.  It was set on an old salt marsh, beyond the sea wall and could only be accessed safely by our amazing Marine Dept (https://marinedept.co.uk/) building a pontoon access and running a water taxi service! They made it possible to shoot at these stunning estuary locations.

We took goats and chickens (and everything else) by boat to this location. It was logistically, exceptionally challenging managing expectations (I slept with the tide tables and knew them off by heart so when departments wanted to recce, I would instantly know if access was even possible), scheduling around the tides, working on protected SSSI sites and still managing to give the creative team what they wanted, but it was worth it all.  The epic, mysterious, muddy creeks and ever changing salt marshes, under huge glorious skies are as essential to story as the main characters are. It was important to Clio, our director, that we really conveyed that feeling of how raw their life was 120 years ago, driven entirely by the tides, the seasons and their superstition, how the estuary landscape fed their fear. I cannot thank my amazing team enough for how they threw themselves into these challenging locations and how muddy they got – every day!

We also turned the quayside at Maldon into a bustling harbour side and 100’s extras in the middle of the second (or third?) lock down which was fun, and challenging.

One of my favourite locations was Will’s Rectory. It was a location I scouted, before the first lock-down on my first days scouting in Essex over a year before we shot it. It was isolated on the salt marsh, at the end of a single track road, on a muddy creek. It was perfect.

The Filming in England team were originally contacted in December 2020. The team supported the production in searching for locations and sent out multiple crew calls. For further information on our Crew and Facilities Database please click here or to find out more about locations across England visit here.

The Essex Serpent is available now on Apple TV +, a monthly subscription is just £4.99 per month after a free 7-day trial.